In use, hydraulic breaker may be subjected to alternating loads such as impact and vibration, as well as heat, deformation and other factors. In addition, due to reasons such as excessive wear and tear, it is easy to loosen the originally fastened parts.

1. The bolt is broken

Due to the harsh working environment of hydraulic rock breaker, its parts are easy to wear, and it is normal for the bolts to break frequently to a certain extent. In addition, strong vibration force will be generated when rock breaker is working, which will cause the guard plate bolts and If the through bolt is loose, the thread of the bolt will often suffer fatigue damage and eventually lead to fracture. The cause is also the welding of the weld, causing deformation; quality problems, insufficient strength; single root force, the force is not uniform.

u Tighten the bolts after use for 20 hours.

u Standardize the operation method, try to do less digging and other actions.

2. The lower cylinder body is broken 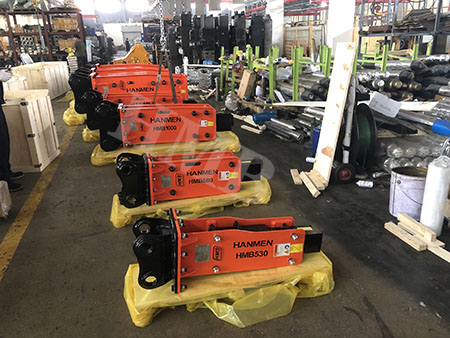 l Because the operator uses the chisel as a crowbar, the jacket and lower cylinder are damaged on one side

l The outer sleeve is worn and the cylinder is damaged; the inner sleeve is seriously damaged, causing the drill rod to deflect, and the uneven force causes damage to the lower cylinder

A. Complete dry driving means that the piston does not touch chisel, and completely useless work is done. At this time, the excavator breaker has no energy output, and all is converted into heat.

B. Incomplete runaway means that the piston has actually hit the drill rod, but because the excavator did not fix the excavator hammer, the excavator hammer was lifted, the drill rod fell back, and moved forward with the piston, returning to the piston. At the beginning of the movement, until it hits the flat pin. At this time, the chisel, piston, flat pin, front cylinder block, and bolt rod were all subjected to the component force of the impact and were all seriously damaged. At this time, the drill rod starts to return. If the piston starts a new round of movement during the return, the chisel will be hit by the piston impact, which will cause greater damage to the next flat pin. Moreover, when the chisel hits the piston, the impact frequency of the piston will be accelerated, which will aggravate more damage.

So when using the excavator breaker, the phenomenon of breaker runaway often occurs. How to avoid runaway for the excavator's breaker accessories?